The Next Generation Irrigation System

I had the opportunity last week to visit Las Positas Golf Course in Livermore and view the installation of what I think will be the future of irrigation systems.  They are installing Rainbird's new IC system which is a system that only has two wires in the trench.  A typical irrigation system has 1 wire that goes to every head in order to achieve individual head control.  That 1 wire gives the sprinkler its identity to the computer. With this system, the solenoid is what gives the sprinkler its identity. 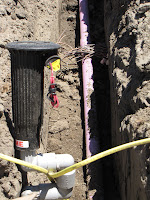 The picture shown left has the new system in the foreground with the old system in the background. The older systems can be a pain to install, but talking with the construction superintendent of Wadsworth Construction, the Rainbird system has been a breeze.  He now just hopes it works.

In a typical irrigation system (according to Rainbird), 29,000 pounds of copper wire is used.  With the new IC system, only around 3,000 pounds of copper wire will be used.  Current copper prices are around $4/ pound so it doesn't take a rocket scientist to see the savings there.  I don't know for sure, but the installation time has to be around twice as fast so there is a labor savings too.  It should be noted that while the wire cost is significantly reduced, the sprinkler is priced higher than a normal sprinkler.  The overall savings though is still roughly 10-15%.

Having the ability to easily add a sprinkler is huge in my book because no irrigation system goes in perfect.  I currently have two options. 1)  Run new wires back to the irrigation clock which is a lot of work or 2) add a special device to the solenoid which 'creates' an individual identity for that sprinkler.  Option 2 isn't always possible though if I don't have enough room on the irrigation controller for another sprinkler.  With the IC system, I just have to connect new wire to the old wire and then program the computer with the new sprinkler information.  I can do this with up to 24,000 sprinklers (Cinnabar has maybe 2,500).  Piece of cake.

While it may sound like I work for Rainbird, I don't.  I appreciate people and companies who make me look good at my job and also make my job easier.  Thank you to Tom Jackson of Sierra Pacific Turf Supply for the site visit.  He can be reached at (408) 374-4700 with further questions.