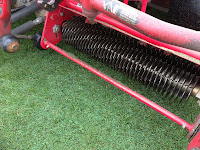 This week at Cinnabar we are doing something that we rarely do here and that is vertical mowing, or also called verti-cutting.  We use the triplex that we use to cut greens, but with the set of knives seen in the picture.  The knives can go as deep as the mat/ thatch layer and remove organic matter or just tickle the grass to remove the grain.  We are doing the latter.  We have been running the brush a lot lately which helps remove grain, but I wanted to do something a bit more aggressive this time around. 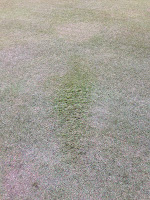 With the fertilizer program that I choose to do here, we rarely need to vertical mow because we keep plant density down.  With the recent high temps over the last two weeks, the grass really took off and I felt it was time to remove some it.  Not really what you expect to hear from a grass grower, huh!  Looking at the picture, I pushed the grass back in the opposite direction and you can see just how much extra tissue there is there.  I had some Superintendents out last week looking at the density and one of them asked me when the last time I put down nitrogen fertilizer out.  I had to look back at my records and it was over 6 weeks ago.  That tells me just how good our soil biology is right now.

Another reason we don't vertical mow often is because the surface disruption can lead to Poa annua intrusion.  Luckily the temps right now aren't favorable for Poa and we are aerating on the 6th of August and it can't get any more disruptive than that.